By providing local services, we can meet with our customers in person. During such meetings we can walk you through the whole web design process so you can figure out exactly the content you want to put on your website.

About the Riverside Region

Imageway Digital Media is a full service design studio committed to creative excellence in web design, graphic design, website hosting, email  hosting, and computer consulting. It is our goal to provide quality web development services to business within Riverside. Our business driven interpersonal approach separates us from the typical web development companies. For over 10 years, we have built a reputation of creating an unparalleled return on investment for our clients.

The City of Riverside, California, is an exciting, diverse, urban center situated in the heart of Southern California. The City of Riverside (pop. 316,619) is the county seat of 7,000-square-mile Riverside County (pop. 1.6 million), and is the largest city in one of the fastest growing metropolitan areas in the United States.

The City of Riverside is characterized by its visionary, strategic, innovative, and inclusive approach to meeting the high standard of services citizens want. The City is assuredly positioning itself as a preeminent “creative city” for the 21st century. In just the past few years, the City of Riverside has launched community-driven visioning and strategic planning processes, including a General Plan update, significantly redeveloped its beautiful, historic downtown, which is anchored by the world famous Historic Mission Inn Hotel, launched one of two downtown wireless malls in California, and embraced multiple green-oriented environmental strategies. The City also boasts four institutions of higher learning, with a student population of over 40,000.

Pictures from around Riverside

Four institutions of higher learning bring a student population of over 40,000 to the city each year. Additionally, continued investment in a unique urban forest of 100,000 eucalyptus, palm, sycamore and pepper trees, as well as orange groves, historic preservation of a unique blend of modern, Spanish and Italian Renaissance, Craftsman Bungalow, and art deco architectural styles, aggressive homeownership strategies, and a network of 26 civic-minded and highly involved neighborhoods are other reasons why Riverside is considered a community of choice by its residents, students, businesses, and visitors alike.

The City builds on unique historical foundations while embracing the promising concepts and practices of the new economy. The city of Riverside was founded in 1870 by a group of utopian-minded Easterners searching for the perfect spot to establish a colony dedicated to education and beauty. Riverside is indeed a city of both. The city’s unusual bounty of universities and colleges are one of Riverside’s great strengths. The University of California-Riverside is the fastest growing campus in the UC system and its well-endowed research program has significant potential to benefit Riverside’s high-tech economy in the years ahead.

Riverside’s proximity to larger cities like Los Angeles and San Diego, as well as the mountains and beaches of the region attract many people. But what surprises new visitors is the city’s distinct sense of place; an identity that delineates it from the suburban sprawl that otherwise defines much of the region. Riverside is a vibrant, yet peaceful city of strong, affordable neighborhoods. A multi-cultural city of arts and culture. And a thriving city full of economic opportunity.

Short video about the Mission Inn:

Grubb and Ellis has ranked the Riverside Metro area in the top five in all four national markets in their 2003 Global Forecast: U.S. Market Strength Forecast 2002-2007:

Riverside is located in the Inland Empire, a $77 billion economy (2000), which has lead California in terms of job creation over the last decade

Model City Clean Air Award
During their 16th annual Clean Air Awards, the Air Quality Management District awarded the City of Riverside the 2004 award for model community achievement. Riverside has been proactive and innovative in significantly improving the air quality in its region through an 11-point program that includes: 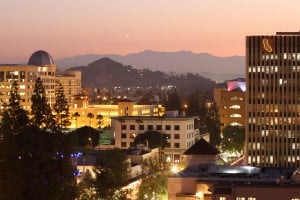 •  Promotion of alternative fuel vehicles for public and private use
•  Opening a compressed natural gas fast-fill fueling station to the public
•  Incorporating an element into its general plan that addresses air quality issues as they relate to land use, transportation demands and jobs-housing balance

2004 Innovation Award for Municipal Cooperation
Sister Cities International promotes peace through mutual respect, understanding, & cooperation – one individual, one community at a time. In 2004, Sister Cities awarded the City of Riverside with an award for creatively sharing its resources with sister city, Ensenada, Mexico. Since 1976, the City of Riverside and Ensenada, Mexico fostered a strong and cooperative sister city relationship. The program started with a donation of surplus property 20 years ago and evolved into more meaningful partnerships between Riverside municipal departments and public service agencies with their sister city counterparts. The Riverside Public Safety departments have a long-standing policy that surplus items will go to Ensenada. When the Riverside Fire Department transfers a fire engine or other equipment to their counterparts in Ensenada, it is customary for the sister city fire departments to participate in training exercises. In 2003, equipment given to Ensenada included a rescue squad vehicle and fire truck for the fire department, 100 used uniforms for the police department and 500 new Spanish-language children’s books for the public library.

C.U.R.E.
C.U.R.E. is a program that focuses on promoting the value of having a clean city, raising consciousness of litter habits, and improving overall community pride and involvement. Keeping our city clean and well maintained will discourage vandalism, graffiti, littering and crime. As part of its C.U.R.E. campaign, the City hosts periodic Household Hazardous Waste special collection events for items like appliances, computers, televisions, and tires. Programs coming soon include door-to-door oil collection and drop-off days.

Riverside Connected – 311 Call Center
Modeled after the increasingly popular 311 concept started in New York City, Riverside’s 311 Call Center (951-826-5311) offers one phone number for residents to use when requesting a service, seeking information, reporting a problem or making a suggestion to the City. In other words, residents can call 311 for all non-emergency requests.

The Riverside Connected Call Center is staffed by Public Relations Specialists that can answer questions, take service requests and refer requests to the appropriate City departments. This “one stop” approach helps put citizens in touch with City government and enables the City to meet constituent needs in a more efficient and timely manner.

Riverside is a great place for a business, and has been recognized as one of the top cities in the world for Information Technology. It is for this reason that Imageway Digital Media is proud to be the premiere web design, email hosting, web hosting, and graphic design company for Riverside County.

It is for this reason that Imageway Digital Media is proud to be the premiere web design, web hosting, and graphic design company for Riverside County.